Arsenal take on Brighton in the FA Cup this afternoon with popular bookmaker Betfred offer 6/1 on Arsene Wenger TO WEAR A COAT! 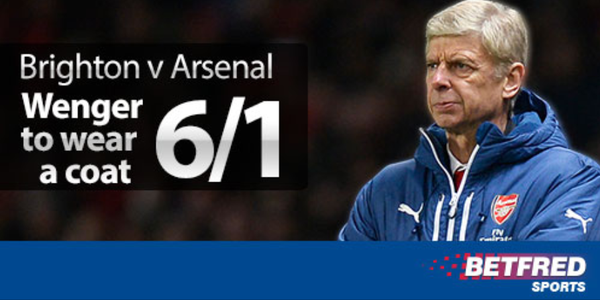 Arsenal are set to include Mesut Ozil in their line-up for the FA Cup clash with  Brighton as he continues his recovery from a knee injury sustained against Chelsea in October.

Ozil has struggled at times during his Arsenal career however the German international has been tipped to come back fitter and stronger this time round, by his manager, Arsene Wenger.

Ozil is fit and worked very hard and now it is down to him playing games,” said Wenger.

“He has worked hard, I think he has taken to the fact that he wants to be stronger.

“You have more time to focus on it. Every day he is in the gym, you also don’t have the fatigue of the games – and it is better when you look in the mirror.”

“Ozil is a fantastic player, he will come back very strong and we are in a position where we have the luxury to have him back now and where we have some players who are completely fresh and rested.

“It can be very interesting if you manage to use them well. At the moment for me it is a bit sensitive as every game is very important and I have to use players who have not played for four months.

Theo Walcott is also expected to feature as too is goalkeeper Wojciech Szczesny, benched following an incident in the defeat to Southampton earlier this month.

Brighton meanwhile will have Lewis Dunk back following suspension while Jake Forster-Caskey (hip) and Craig Mackail-Smith (ankle) are fit again after missing the Championship league game with Ipswich.