Burnley insist Danny Ings not for sale amid Liverpool interest

As reported earlier in the day, we had reported that Liverpool were ready to meet terms for Burnley striker Danny Ings in the last few days of the January transfer window. It was states that the Reds would buy the striker and then loan him back till the end of the season.

Though, the Turf Moor side have now made it clear (as reported by BBC) that the English International will not leave the club. Burnley chief executive Lee Hoo 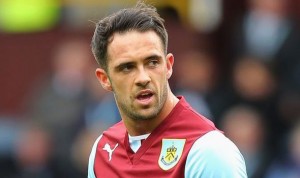 Ings is in the final six months of his contract and his exploits has attracted keen interest from Tottenham and Real Sociedad but Burnley aren’t willing to let go their prized asset till the end of the season.The striker has scored 7 Premier League goals this season after having struck 21 times in the Championship last term helping his side to win promotion to the top flight of English Football.

Moss also added, “Over the course of the window, the player himself, (manager) Sean Dyche and the chairman have made it clear he won’t be going anywhere and we consider that the end of the matter.

The report also states that Liverpool will have to pay a fee even if they sign Ings at the end of his contract as he is under 24.