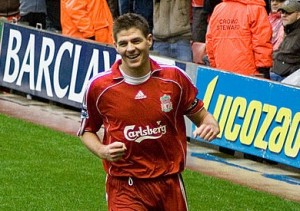 Liverpool vs Man United. It seemed the perfect stage for the Liverpool talisman to make his full debut back from injury. Leading his side out for the first time since March, he soon got back to his brilliant self by scoring at the Kop end to a roar of approval from the Reds fans behind the goal. Gerrard looked back to his best, quicker and fitter than he was before his injury sidelined, and with that raw appetite for the game returned to his eyes. His touch failed him on a few occasions that day, but the hope in the ground that Gerrard could once again outclass the opponents midfield single handedly, was tangible. He was a new man who brought strength and consistency back into the team, something which fans and even Gerrard himself said they could see not ever happening again, in saying:

“Basically, I knew that wasn’t right,” he said.
“I was missing training sessions and coming in the day before a game trying to get that last session in or having injections to play the next day.You can only do that for a certain amount of time before your body gives in – and mine gave in.”
“My groin packed in on me and, when it happened, I was down and I was low.”

A month on and he was pictured leaving hospital with plaster on his ankle. Liverpool issued a statement saying that it was totally unrelated to his groin problem, but in some ways this only increases the concern for Liverpool fans. At the age of 31, Gerrard is not young, and you cannot help but think back to those such as Owen Hargreaves who’s careers were more or less cut short by injury.

So the question remains, if Gerrard is never going to return to his best again (a big if), have Liverpool adapted enough to be able to cope without him?

Now obviously the large amounts of money that Liverpool have spent over the summer are extremely important, with the majority of it being spent on midfielders. However, I believe there are two far more important factors in Liverpool replacing their legendary midfielder in the long term.

Firstly, is the bringing forward of young talent and the progression of current midfielders. Players such as Jay Spearing and Jonjo Shelvey (who is currently on loan) need to step up to the plate and be able to play full 90 minute games whilst not letting the occasion overcome them. The more experience they get the better. Players such have Lucas Levia have also got to develop themselves as players to become the new main man in midfield, and take on the responsibility that currently lies with the more experienced likes of Gerrard and Carragher.

Secondly, Livepool must adopt their playing style, which in a sense they have done already. When Gerrard was injured they played two wingers alongside Adam in midfield and this system seemed to bring the flow and pace back to the team. Liverpool must be able to be flexible with their system so when he eventually does leave, there will be no gaping hole left for a less experienced, recognizable player to fill. If Liverpool can do these things, and keep buying more players in transfer windows, there is no reason why a lack of Steven Gerrard means a lack of silverware, and it also means less pressure will be put on Gerrard to carry his own team through a season, which he has had to do recently.