Cardiff opt not to take Chelsea’s Islam Feroz on loan

The Blues striker Islam Feruz has returned to Stamford Bridge this week after Cardiff City declined the opportunity to bring him in on loan.

The 19 years-old Feruz, who has played for Scotland U21′s, spent a week on trial with Russell Slade’s team with a view to signing until the end of the season.

However, the youngster failed to impress the management in the Welsh capital and has returned back to Jose Mourinho’s squad to fight for recognition, as Cardiff insist that no bid will be put forward.

“We’ve made a decision on Islam and he’s gone back to Chelsea,” said the Bluebirds boss. 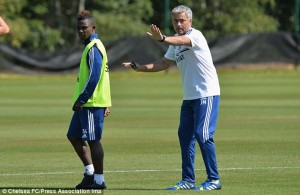 He still has four and a half years to run on his Blues contract and has just returned from a spell with Greek League club OFI Crete.

As, Chelsea’s gaffer Mourinho was happy for him to play Championship football with Cardiff but Slade has sent him back.

Feruz, who many believe could grow to become a great talent, was also linked with moves to other Championship clubs such as Bolton and Brighton but reverted back to Cardiff after a late turnaround and a change of agents when the deal had originally been cancelled.