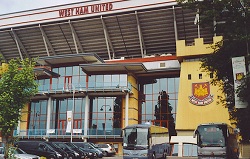 Last season myself and Laurie both picked a side from the FA
cup onwards and followed them throughout the tournament when they lost we
followed the team who beat them, this continued all the way through to the
final. This year we are doing the same with the Carling Cup starting with my
selection Aldershot Town.

This is the David and Goliath of the League Cup, Aldershot
Town are in their 3rd year back in the Football League, coming off
the back of an average season with a good end after the appointment of Dean
Holdsworth.

In contrast West Ham United had a nightmare season getting
relegated from the Premier League, in the summer they had somewhat of a rebuild
including new manager in Sam Allardyce, as well as keeping hold of the likes England
internationals Scott Parker, Carlton Cole and Robert Green.

Despite the key signings and keeping hold of star players
West Ham slumped to an opening day defeat in the Championship at home to
promotion rivalsCardiffCity.

Aldershot had a better start to the new campaign with a 2-1
win away at Bradford with goals from striker Danny Hylton and an own goal from
Bradford’s Robbie Threlfall.

This fixture was originally scheduled for 15 days ago however due to riots the game was postponed to today and the fortunes of both clubs have changed dramatically since the original date set for the match.

However since the opening day of the season fortunes have changed massively for both clubs,Aldershothave failed to find the back of the net and have lost three games in a row.

West Ham since their defeat to Cardiff the Hammers have found their feet in the Championship, recording two wins away from home before being held at home by fellow promotion hopefuls Leeds United.

Allardyce is still looking for his first victory at Upton Park following his summer appointment and will not want to get the home support on his back so will go with a strong side to keep the fans on side.

Players in the Aldershot camp they will see this
as a major chance to get their name in lights, it‘s a
chance to make a name for themselves and with the transfer window still open
maybe put themselves in the shop window.

Aldershotmanager Dean Holdsworth likes to deploy a 4-2-3-1
formation which gives the side good width whilst being able to give good
support to both the defence and the attack.

Aldershot don’t currently have any star names for the fans
that are not familiar with the Football Leagues, if you happen to watch the game
look out for the earlier mentioned Daniel Hylton who can play any where across
the front line, impressive left back Anthony Straker who represented England at
under 18 level and England C international Alex Rodman who can also play across
the front line.

I doubt West Ham’s squad need much introduction but should
you be unaware they have many players of Premier League quality such as Mark
Noble, Matthew Taylor and Kevin Nolan to name just a few.

Although many people will write them off you cannot count
Aldershot out they are a good unit who work for each other and that will always
give them a chance. Of course West Ham will be favourites with the bookies and
rightly so but I do not expect a mauling.

For me the smart money is on a 3-0 or 3-1 home win, a morale
boosting win for West Ham and Aldershot can go back to Hampshire with their
heads held high.

What are your thoughts? Will West Ham completely dominate the shots? Who are the players to watch out for in this tie in your opinion? What is your score prediction? Leave
a comment and let us know your thoughts