The Gunners are closing in on William Carvalho this January but have lost out on an initial bid for Moussa Sissoko.

The Gunners have long been linked with the Portuguese defensive midfielder, and Arsene Wenger is poised to test Sporting’s resolve with a bid in January.

Remember, Manchester United are also in the race for the player, but according to the reports in Portugal, Arsenal are in the strongest position at present.

The news comes after the Arsenal boss admitted his squad needs strengthening in the central midfield area. 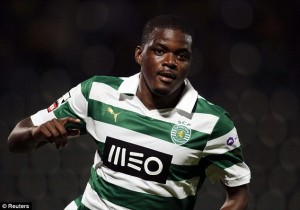 “If you look at the number of games some players played and the injuries we have with [Jack] Wilshere, [Aaron] Ramsey and [Mikel] Arteta, we’re a bit short at the moment in midfield”said Wenger.

On other side, Newcastle will reject a 9 million bid for the club’s French midfielder 25 year-old Moussa Sissoko.

The Gunners will have a tough time securing the signature of Sissoko, with Newcastle set to reject an initial 9m bid. The powerful midfielder is highly rated by Wenger though, so a follow-up bid may not be far away.

Also according to Reports in Norway, the 16-year-old Norwegian international,Martin Odegaard is also ready to turn down offers from Arsenal, Liverpool, Manchester City and Manchester United in favour of a move to Southampton.