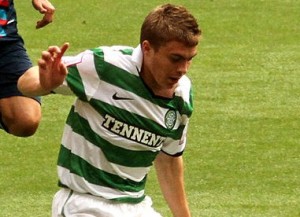 Tottenham boss Harry Redknapp is keeping tabs on Celtic and Scotland winger James Forrest following his impressive form.
Redknapp sent out his chief scout, Ian Broomfield to watch the 20-year-old in Glasgow as Forrest played against Hibernian at the weekend, and returned with positive feedback.

“We have had good reports of what is obviously a good player,” Redknapp told BBC Scotland.
“But he belongs to Celtic and that’s as far as it’s gone.”

However, the Spurs manager insisted that the deal was still a long way off and he was not even at the stage of contacting Celtic boss Neil Lennon or considering a bid for Forrest, despite recent speculation.

“It is like everything, you get reports on players and suddenly, because you are going to watch them, you are trying to sign them,” he said.
“It is just about having reports on people, you put them on the file and you keep looking.

“We haven’t gone any further. If we were to go any further, I would phone Neil and have a chat with him about the boy.
“It was just that Ian decided to have a look at him, but it was the first report on him really.”

Even though he only made his debut for Celtic in May 2010, Forrest has already made his first senior cap for Scotland against Republic of Ireland in May.
Lennon picked Forrest out as one of the few successes in a dismal goalless draw at home to a Hibs side that Celtic smashed 4-1 in the Scottish Communities League Cup three days earlier, in which the Spurs scout witnessed first-hand.

“I haven’t seen the boy play. I have seen him on TV and bits and pieces, but I would want to see him in a couple of games if I was ever going to do anything.
“I wouldn’t sign anyone without seeing him myself.”

However, Redknapp is hopeful that Forrest will rekindle Scotland’s reputation for wing trickery.
“I remember the Jimmy Johnstones and Willie Hendersons of the world – all the great wingers that you produced up there over the years and hopefully this kid will be another young winger coming through,” he added.

“Every good team in England had three or four top players in Scotland in it, but in the last few years that’s changed an awful lot.
“But hopefully there’s some talent coming through again. It goes in cycles and there’ll be some great players coming through from Scotland again.”