The Blues full-back Cesar Azpilicueta is expected to be out of action for the next 10 days due to a minor muscle injury he suffered during the 2-0 victory over Newcastle United on Saturday 10 January.

The Spanish International was forced to leave the Stamford Bridge ground in the 37th minute after picking a groin injury while trying to stop Remy Cabella during a one-on-one race with the Newcastle winger.

But now Chelsea’s defender will be on the sidelines for around 10 days, meaning he will miss the next Premier League game against Swansea and the Capital One Cup first-leg match with Liverpool. 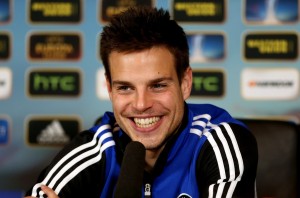 After their Premier League victory over the Magpies, the Blues will now visit the Welsh side on 17 January before their trip to Anfield on 20 January. Now if his recovery goes well, he may be ready to return to action for the FA Cup fourth round tie against the winner between Millwall and Bradford City, on 24 January.

The Spaniard has become one of Mourinho’s untouchables stars since he beat Ashley Cole to the left-back role earlier last season, even though he is originally a right-back. This season, even though Filipe Luis arrived from Atletico Madrid for around £16m, Azpilicueta has remained the first choice, starting 17 Premier League games.