The Spanish star Cesc Fabregas couldn’t help himself from poking a bit of fun at Oscar during Chelsea’s Bridge Kids party on Wednesday afternoon.

The west London club’s midfielder duo were among the players to meet some of the Blues’ young supporters at a special event.

And as Oscar and Fabregas posed for a picture together, the Spaniard cheekily questioned the Brazil playmaker’s chosen attire.

Fabregas later posted the picture above on his Instagram account on Wednesday evening and wrote: “@oscar_emboaba came with his pijamas ready to go to bed… #Crack.” 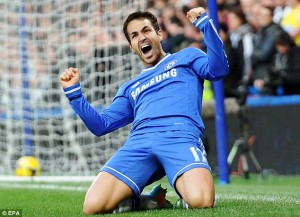 The Spain international, who spent three seasons back at boyhood club Barcelona, has scored two goals and made an incredible 14 assists in the Premier League for the Blue so far this term.

Currently Chelsea is leading the Premier League this season and if Mourinho’s men will continue this brilliant performance in coming months, including 100% wining ratio at Stamford Bridge, than they will be definitely finish as the champions this year.