Gianluca Fiorini, an agent who helped the Dutchman move to AC Milan, claims the Blues are looking to end his loan move prematurely.

According to a report in media, which cites quotes from an interview with intermediary Gianluca Fiorini, on Mediaset Premium Calcio’s ‘Speciale Calciomercato’ programme, the Blues are far from happy with the way things are working out for the player at Milan.

“Chelsea are very annoyed because they wanted the player where he would get more room… Chelsea are considering other possible loans. The next few matches will be decisive,” he said.

The comments have sparked fresh speculation from sources in English media that the Dutchman could be set for a loan move elsewhere in a bid to gain more game time. 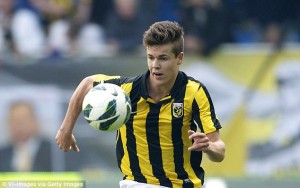 Van Ginkel has made just four appearances for AC Milan this season, with only two of those games coming in Serie A.

A series of injuries have hampered the Holland international’s impact so far, with the 22-year-old stretchered off with an ankle problem on his debut for the Rossoneri.

Worse was to come however, after van Ginkel was ruled out for two months after picking up another ankle injury following a robust challenge from teammate Sulley Muntari in training.