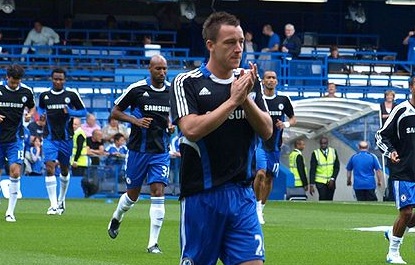 Chelsea FC captain John Terry has praised the attitude and support that England’s rugby manager Martin Johnson has given the Xv as they prepared to embark on yet another RWC quarter final.

The England team have come under increased pressure for certain “off-field” activities recently but John Terry believes Johnson was right to come out and stand by his troops.

“I like the way the manager has come out and defended them. When managers come out and back you, it brings you together. I like that.”

Terry was talking ahead of his own crucial fixture in which the England football team face Montenegro for a place in next years European Championships and believes that despite some “ok” performances, the XV have a good chance of progressing.

“They’ve played OK in a couple of their games, but when something like that happens it brings everyone closer together. You knit together. It’s you against the world, really. The demand on their bodies is incredible. They’ve got a really good chance and, hopefully, all that (off field issues) will be forgotten.”

The England rugby team were once again criticised this week for taking part in bungee jumping on a day off but the Chelsea FC captain believes that those are the type of things he would only consider doing once his playing days are over.

The Chelsea defender also claims that he had the chance to swim with sharks at last years World Cup in South Africa but was advised against it by England’s second in command Franco Baldini.

“At the same time, me and Joe Cole wanted to go in the shark cages in South Africa during the World Cup last summer and were stopped by Franco Baldini. He said it probably wasn’t the best idea.”

The Chelsea and England skipper faces Montenegro on Friday evening whilst England embark on the next round of their World Cup campaign against France on Saturday morning.