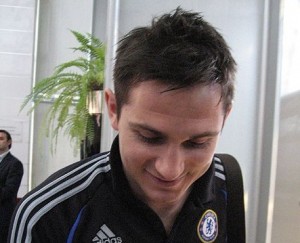 Chelsea FC midfielder Frank Lampard believes he could go on to play as long as Manchester United’s Ryan Giggs if he can manage himself well.

The England international was in fine form against Bolton Wanderers at the weekend netting three goals in their 5-1 victory but the player has been under criticism over the last few months with many suggesting he is not too old to perform at his best and that his time as a Chelsea player is nearly up.

Lampard though looks to be having none of it and admits that whilst the first few times being descibed as “too old” were not required, he now knows how to shrug it off.

“People talk about age but I feel good, as good as I have ever felt, with experience, it is even easier to manage yourself through a season and week to week. Hopefully I can keep doing what I did against Bolton.”

“Everybody gets that, being told ‘You’re too old’. Probably the first few times it annoys you, then you realise that is just the way it is.

The Chelsea midfielder then had praise for Welshman Ryan Giggs claiming the 37 year old is consistent enough to be able to play at the highest level.

“The only way to stay away from that is to keep playing well. That is why Giggs plays comfortably until he is 37 – because he consistently plays well.”

Lampard could well be part of Fabio Capello’s England first eleven when they play Montenegro on Friday.