The Blues boss Jose Mourinho paid tribute to Liverpool goalkeeper Simon Mignolet after his “amazing” performance against the Blues on Tuesday night, as his troops reached Wembley.

The Reds travelled to west London to take on the Premier League leaders looking to build on their fine performance back at Anfield in the first-leg, where they were unfortunate not to win the game in a 1-1 clash.

The Anfield side had 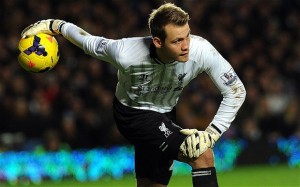 dominated the game at Anfield but only found the target once in response to Eden Hazard’s early penalty, leaving the decider finely balanced at Stamford Bridge.

The Belgian International Thibaut Courtois, like in the first-leg, had to make a number of saves to keep Liverpool out at the Bridge, but Mignolet also had to be on his toes throughout the game.

This time the Belgian No.2, Simon Mignolet twice denied lethal striker Diego Costa, initially to block a deflected strike and then to rush out and tackle the Spain international as he sought to convert the opening strike.

The Portuguese gaffer, who was talking to the fourth official Phil Dowd when Branislav Ivanovic headed home in extra-time, admits he was paying close attention to Mignolet and praised the former Sunderland for his strong showing.