According to reports, Jose Mourinho is keen on having his hands on the young England international as he looks to add more pace to his squad

Liverpool fans might be really offended after it emerged that Jose Mourinho might have asked Chelsea owner, Roman Abramovic to free some cash in a bid to make an approach for Liverpool winger Raheem Sterling. 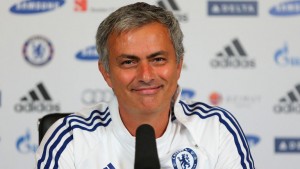 The young Englishman has been a beacon of hope for the Reds since the beginning of the season and has helped the team a lot in moving on from Luis Suarez.

And now it appears that Chelsea could steal away Liverpool’s latest and brightest shining light. Reports claim that the 20 year old might consider leaving the team if they fail to qualify for Champions League and has so far not signed a contract extension which has been offered to him.

This impasse has also alerted Chelsea who are keen on taking Sterling away from their league rivals.

Meanwhile, the Blues are also looking into the possibility of acquiring the services of Newcastle United’s Moussa Sissoko. The France international has been hotly linked with a move to Arsenal but with no offers forthcoming, could consider joining Jose Mourinho’s side who are currently at the top of the table.