The Blues are eyeing up a stunning move for Marco Reus or Manchester United target Juan Cuadrado as a possible replacement for Andre Schurrle according to reports.

As speculation over Schurrle’s future has been unrelenting, and he has had the ignominy of being substituted at half-time on four occasions this season, the German’s time at Chelsea could be up.

The 24-year-old has already stated his desire to fight for his future at the club “In a phase with less playing time, transfer rumours are always coming up. Of course I want to be on the pitch as much as possible and score goals for my club.” said Schurrle.

He said in a team like Chelsea with many top players everyone has to prove their worth again and again. Such an illness throws a player back a few weeks. 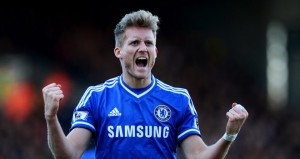 Despite this, it seems Schurrle doesn’t fit into Jose Mourinho’s first-team plans and the Blues are turning their attentions to Reus or Cuadrado.

Though the German star appears to be Real Madrid bound, Chelsea are looking to activate his £20 million release clause even though Manchester United and Arsenal are also keeping tabs.

Mourinho is keen to bring in a right-sided player, and Fiorentina winger Cuadrado, who was linked to United in the summer, has also been mooted as a target. It remains to be seen what role Schurrle will play as Chelsea push for the title.