According to recent reports that have claimed that Jose Mourinho will let goalkeeper Petr Cech to decide where his next destination is at the end of the season, with speculation growing that both Arsenal and Liverpool are eyeing the 32-year old.

Cech is currently tied to Chelsea until 2016 but after falling behind Thibaut Courtois in the starting line-up reports are claiming that the Chelsea boss will let him go.

Wenger had attempted to sign Cech beck in 2004 when the player was at French side Rennes just before he joined Chelsea.

Just only a year left on his contract at Stamford Bridge, Wenger might be able to poach him for a much smaller fee, around £5 million bid to switch the player to north London.

For Arsenal in goal, Wojciech Szczesny was recently dropped after his smoking incident and lapse in form allowing new-boy David Ospina to clinch back to back clean sheets. 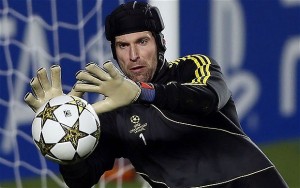 The Colombian looks set for an extended run in the first team should he remain fit and with Emiliano Martinez also performing well this campaign,

Now it’s almost certain that Wenger will not be looking to bring in an expensive goalkeeper such as Cech despite his obvious high caliber status. The Czech’s wages alone will probably give Wenger a heart attack.