The German star Andre Schurrle is on the brink of joining Wolfsburg after the two clubs held talks over a deal at the weekend.

Schurrle is out-of-favour at Stamford Bridge, and Jose Mourinho is happy to cash in on the 24-year-old if he can secure a replacement.

The Fiorentina’s Juan Cuadrado and and Shakhtar Donetsk’s Douglas Costa are being looked at as possible replacements. 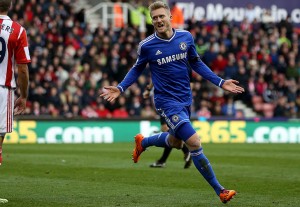 The Blues are understood to be demanding £25m for Schurrle, but the Telegraph reports that Wolfsburg are keen on loaning the player until the end of the season before trying up a permanent transfer in the summer.

The FFP rules may see that deal fall apart, however, with Chelsea unlikely to sanction a loan exit when it is likely to cost at least £20m to replace the German.

One more player seemingly heading for the exit door is Mohamed Salah, with Roma thought to have agreed terms on a loan deal with a permanent option in the summer.

Though, the Italian side are also in the market for Shakhtar’s Adriano and Dnipro’s Yevhen Konoplyanka and could move for either of the Ukraine-based duo as a cheaper alternative to Salah.

Andre Schurrle is one of the key players for Germany as he played brilliantly for his side’s world Cup win in Brazil 2014.