The Blues midfielder Cesc Fabregas could miss the big clash with Manchester City on Saturday after leaving yesterday’s game with an injury confirmed the clubs official Twitter account.

The Spaniard was replaced only 50 minutes in by Ramires, and it was a change that made for worrying faces among the Chelsea fans as they prepare to have their biggest clash of the season.

Fabregas has been a 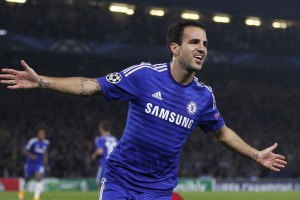 key element in Jose Mourinho’s dominance this season and his manager will be hoping the Spaniard can recover in time for the clash.

The 27 Years-old will be given the longest possible time to recover for a Saturday fixture as the game is a 5:30pm kick off, but that could also mean changes with yesterday’s replacement Ramires handed the chance against the defending champions.

The Blues are currently five points clear at the top of the table and a win against City could extend the gap to eight with 15 games remaining. It could be a big enough gap to hand them their first Premier League crown in five years.

As they need to do the business. They did so last night against Liverpool as they booked their place in the Capital One Cup final against either Spurs or Sheffield United.

A strike from defender Branislav Ivanovic was enough to settle the tie in extra time after Liverpool gave it their all. However, the blow to Fabregas and potentially Filipe Luis who was replaced as the game wore on are worries fro Mourinho ahead of City’s visit.