The German international Marin moved to Serie A  side Fiorentina at the start of the season, but his season-long loan deal has not gone as planned.

He has registered just four appearances this term – all in the Europa League. Although he has been on the substitute’s bench for 12 league games, he has yet to take to the field. 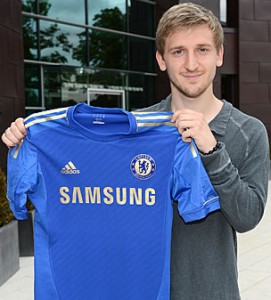 With no future expected at Stamford Bridge for the 25-year-old, it is highly likely that the loan deal was to show off Marin’s talents ahead of a sale this month, or over the summer.

But little has been done to prove to clubs that he is worth playing a large fee for Fiorentina had the option to make the loan deal permanent in the summer for a £4.2 million fee, as per reported in the media.

Now with little done to impress the Viola management, a report in Fiorentina, which published in December, indicated that he could be heading back to West London in January.

Even though there has yet been no confirmation from either club that the loan deal has been cut short, a further report in Belgian media has indicated that Marin is in Belgium today ahead of medical tests preceding a loan deal with Jupiler Pro League champions Anderlecht.

After the deal Chelsea’s winger in Belgium until the end of the season, and the Blues will be hoping that the German finally gets the chance to shine ahead of a summer departure from Stamford Bridge.