Nathaniel Chalobah will not be moving from Chelsea to Bordeaux on loan according to the club’s president, who was speaking to French media, because of FIFA’s rules that prevent a player from playing for more than two different clubs in one season.

Chalobah has played for Burnley already this season, having spent the first half of this season out on loan with the Clarets, and he has featured for Chelsea’s U21 side as well.

FIFA classify the U21 Premier League as an official match and speaking to Sud-Ouest Jean-Louis Triaud, the Bordeaux president, has confirmed that the club do not expect Chalobah to be arriving on loan.

”From the moment the FFF and the League have told us of the impossibility of approval, there were more hope. The Chalobah folder, for us, is closed. ” he said. 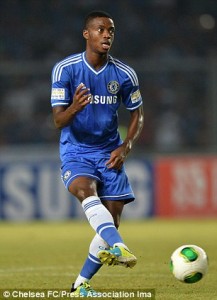 Given that this rule of FIFA will apply to any further loans that Chelsea consider for Chalobah it now appears likely that the club will have to keep Chalobah at Stamford Bridge, and he may possibly be brought into the first team squad for the last few months of the season.

At the moment the club do not have many first team players who have been brought through the club’s academy, with captain John Terry being the only example and it will be interesting to see if that changes in the future.