The Belgium International goalkeeper, Thibaut Courtois has been voted as the second best goalkeeper in the world for 2014.

The youngster was in impressive form for both club and country throughout the whole of last year which prompted Chelsea manager Jose Mourinho to make Courtois his No.1 keeper at the club over long serving Petr Cech.

Courtois only retuned to Stamford Bridge in the summer after two seasons on loan with Spanish champions Atletico Madrid and he has continued his good form since he came back.

International Federation of Football History and Statistics (IIFHS) have on Thursday released the goalkeepers who made the top ten and not surprising Bayern Munich star Manuel Neuer has been voted the best with 216 points followed by Courtois with 96 points. 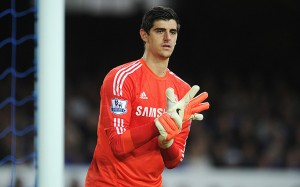 Courtois will also find out this month if he will be voted by FIFA as the best goalkeeper of the year but he will have his work cut out because of the competition from Germany international Neuer.

As, both players have good years with their club and countries but the fact Neuer won the World Cup last summer with Germany may land him the award.