Chelsea defender, Alex Davey believes there is still more to come from him in a Scunthorpe United shirt after signing on loan for the rest of the season.

The United extended Davey’s initial one month loan last week and now the 20-year-old wants to show the Scunthorpe fans what he is capable of playing for them.

Davey’s started that by netted his first professional goal against Chesterfield in the FA Cup, a sublime strike from the edge of the box and one that was seen by his mum and dad who were at the game.

“I didn’t really see the keeper when it came to me on the edge of the box and I just took a touch, stayed calm and caressed it in,” Davey said. 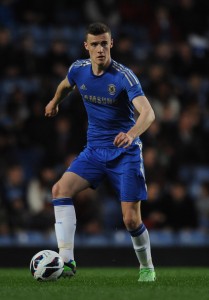 The 20 year-old said that he was not expecting to come straight into the team when they were winning but he did and it is been a really good start.

Davey reverted to right back from his normal central defensive position for the Chesterfield game after Richard Brindley returned to Rotherham following his loan spell.

It is not a position Davey is familiar with but he feels he has adapted to the role well after first taking it up for the Iron in the FA Cup second round replay against Worcester City.