Why I completed deal to sign for Arsenal, says Krystian Bielik

The Gunners new boy Krystian Bielik says he joined the club to fulfil his dreams. The Polish star joined Arseanl in this transfer window. 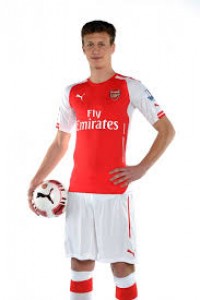 Arsenal confirmed the signing of the highly-rated midfielder on Wednesday, splashing out a reported £2.5m to bring him to the Emirates Stadium.

The 17 years-old, who penned a long-term contract with Arsenal, believes the time was right to leave Polish league leaders Legia Warsaw.

“I have decided to move to Arsenal and although I cannot be sure of what is to come in the future, I’m going to London to fulfil my dreams,” said Bielik to Legia’s official website.

“I felt at home in Warsaw and I will always have fond memories of the time I spent in Legia. Dominik Ebebenge, the development director, was always a huge help for me and I cannot find words to describe my gratitude towards him.” he added.

Bielik said that he also grateful to his teammates and gaffer Henning Berg for trusting such a young player and giving him a chance to play for the first team. It is mostly thanks to him that I am able to move to Arsenal.”