The Belgium Interantional, Thibaut Courtois hasn’t made an appearance in the Chelsea goal since the 5-3 abomination at White Hart Lane, but that’s not because he’s being punished for letting in so many goals.

The Belgian broke his thumb during the thumping, and with Petr Cech as his backup, Jose Mourinho’s made the smart decision to play the healthy world-choice goalkeeper rather than the one with the broken thumb.

According to the reports that state of affairs is probably set to continue for Chelsea’s trip to the Liberty Stadium.

The former Atletico Madrid goalkeeper is back in training, but is not yet fully healed and would have to play with a brace if he took to the pitch. 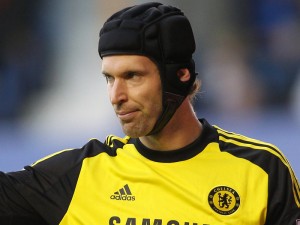 Instead, expect Cech as a starter, with Courtois riding the bench. The 22-year-old’s claim to the starting spot isn’t so secure as to let him stay in goal with a broken bone.

And with Cech not too far from the all-time Premier League clean sheet record fans will be grateful for every chance he gets.