Courtouis was the difference between two teams, says Rodgers

The Reds  gaffer has highlighted Thibaut Courtouis as the difference between Chelsea and Liverpool over two legs after the Blues booked their place in the League Cup final.

Liverpool were unable to score a vital goal at Stamford Bridge on Tuesday night after a 1-1 draw at Anfield in the first leg of their Capital One Cup last-four clash.

” I think the goalkeeper for them has won them the tie really” said Wenger after the match. 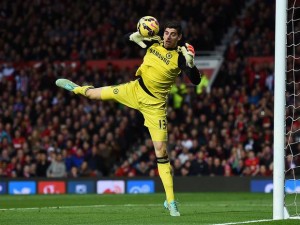 The Blues defender Branislav Ivanovic scored the winner in the fourth minute of extra time as Courtois made four saves to deny the visitors a crucial away goal.

Courtouis made a staggering nine stops across the two legs, andLiverpool manager Rodgers was keen to stress Courtois’ role in sealing Chelsea’s passage to the final.

“I think we were the better side over the two games, but ultimately you’ve got to get the place in the final,”  said Rodgers.

The Northern Irishman said that there were not going to be many chances in the game for both sides, but certainly in the first half his side created enough to maybe get a couple of goals.

Chelsea will face Sheffield United or Tottenham Hotspur in the Capital One Cup showpiece at Wembley.