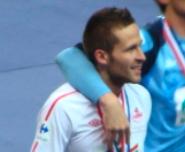 Newcastle midfielder Yohan Cabaye has admitted that he was close to joining Premier League rivals Aston Villa, before snubbing a move to Villa Park in order to complete the deal to St James’ Park.

Cabaye has looked impressive in the start of his career at Newcastle since his summer move from French champions Lille, however revealed that he was considering a move to Aston Villa.

Incredibly, the French international has stated that he was ready to make the move to Villa, but the departure of fellow countryman Gerard Houllier caused the deal to fall through.

Arsenal were also rumoured to be interested in Cabaye, but the influentual midfielder played down the links, and insisted that he is happy with his decision to join the Magpies.
Cabaye has been a massive part of Newcastle’s impressive start to the new campaign as they remain unbeaten in the Premier League.

“My name was being linked with clubs left, right and centre for two years, but there were no firm contacts,” Cabaye is quoted as saying in The People.
“I had the possibility of going to Aston Villa. But it depended upon whether Gerard Houllier was going to continue in charge and as he ended up not staying I did not join them.

“A lot of people thought that I was going to sign for Arsenal this summer, but Newcastle were all I had.

“I was never in contact with anybody at Arsenal. They made some enquiries but that was as far as it went.
“The only person I spoke to on the phone was Alan Pardew, and I really liked what he had to say.

“If it was all about money I would now be in Russia and not in Newcastle. Many people did not understand my decision but it was easy for me.

“The Premier League is the best in the world and I’m happy with my choice. ”