With the 2011 cricket season fast approaching I took the chance this week to talk to Phil Lewis from King’s College Taunton on his thoughts for his First XI this year. King’s cricket has gone from strength to strength over the last three years fielding arguably two of the best teams to have ever represented the school.

The main reason behind this has to be the quality of coaching that has been obvious in recent years. Andy Jones, formerly the Director of Cricket and Co-Director of Sport at the school, set the wheels in motion for what Phil calls the ‘professional approach’ that the school has undertaken the last few years. Jones did a great job in recognizing the cricketing potential from 2008 and embracing it in order to develop the best team he possibly could.

In 2008, King’s reached the Semi-final’s of the National Twenty20 competition, with current Somerset CC C keeper-batsman Jos Buttler as Captain. This was the moment when the school realised that over the next couple years Cricket would play a key role in the life of the school. 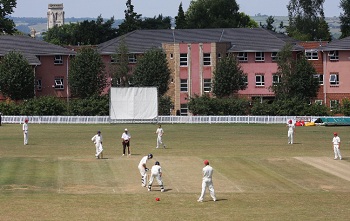 In the summer of 2009, current Head of Cricket, Phil Lewis began to have more of an involvement with the First Team and provided a great team with Andy Jones. This partnership ensured that the players always had someone to go to if they wanted to have a chat about cricket, no matter what time of year.

Groundsman and cricket Guru, Dennis Breakwell must not be forgotten. He is a key member in the functioning of not only school cricket, but the school itself. The high quality wickets that are enjoyed every weekend are testament to the dedication of the man and he truly is regarded in high status by everyone who knows him. Dennis is a permanent source of Wisdom thanks to over 400 First Class appearances for Somerset and Northamptonshire.

As I sat down to Interview Phil, who took over from Andy Jones at the end of the 2009 season, on the 1st of April, with the sun beaming through the window, the enjoyment he takes at the prospect of the season was obvious. When asked whether he was excited about the upcoming season, the answer was very predictable. “Of course I’m excited, we’ve had some very talented players in the last couple years and I’ve been encouraged at the talent we still have left as I’ve worked with the boys over the course of the winter.”

King’s cricketers, male and female, enjoy net sessions once or twice as week throughout the whole winter and Dennis is always on hand for anyone who wishes to face the bowling machine. Phil is hoping that this constant availability of cricket will prepare his cricketers for the forthcoming season, especially as King’s have now established themselves as the team to beat within the West of England schools cricket league, which they have won two years in the row. Phil went on to say how the “positive attitude to training that his players have, along with their well balanced school lifestyle” stands them in good stead to reproduce this success and make it third time lucky. 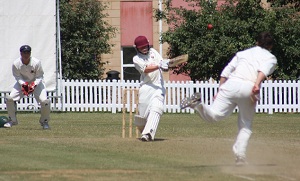 King’s success over the last three years has paid off to a huge extent with three Old Boys gaining contracts at Somerset CCC. Jos Buttler, whom you may have seen starring for Somerset in T20 Finals day last summer, is joined by 2011 Captain, Alex Barrow and South African born, Craig Meschede in the Somerset squad for 2011. Phil believes that the school has a “strong relationship with Somerset County Cricket Club” and added to the “Highly qualified coaching” they already receive at school this allows them to forge a career in Cricket and make it at the next level.

I asked Phil whether he believes this side has it in them to emulate the success of the 2009 team, which won the prestigious title of ‘Wisden Schoolboy Team of the Year’. He replied; “I’m looking incredibly positively at this season as I think the boys can achieve a lot if they work hard and perform when it matters the most. The three contracts that ex-King’s pupils have gained recently have shown the boys what can be achieved and this has also helped maintain the level of talent the school has enjoyed lately” He continued; “the status of the school as a cricket institute has improved a out of all proportion and the school is capable of producing high quality cricketers who can make it into professional cricket.”

Phil has carried on the good work started by Andy Jones and taken it to another level. His ambitions for his team this year are high as always. “I’d love to see us progress further in the National Twenty20 Competition this year, going out at the quarters the last two years have been the only blemishes on fantastic seasons and the prospect of a matchup with the old arch rival, Millfield school, is an enthralling one.”

His ambitions don’t confine themselves to one competition. “I believe that we should be confident of defending our title in the West of England school cricket league.” This competition includes other renowned cricket schools such as Sherbourne, Monmouth and Clifton. “Ultimately, I’d like to see more and more King’s boys pulling on County age group shirts and them maybe even gaining professional contracts like those before them.”

King’s First XI leave on Easter Sunday for a pre-season tour to the midlands and it’s for certain that preparation isn’t being taken lightly. When the school summer term commences on the 27th of April the team are straight into the action with a match up against Exeter.