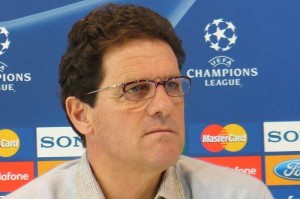 Peter Crouch has revealed he will never consider retiring early from England duty despite falling out of favour withFabio Capello since moving to Stoke in the summer.

The 30-year-old has has been prolific for England since making his debut in 2005 scoring 22 goals in 42 in caps but has failed to feature for the national team since scoring a late consolation against France last November and admits Capello’s ignorance is frustrating.

Despite admitting he reached his lowest point after being overlooked by the Italian boss for the games against Wales and Ghana despite being told he would feature he confessed that retirement has never crossed his mind.

He said: “For the Wales game I wasn’t on the bench and then the manager told me I was going to play 45 minutes (against Ghana) and I didn’t play again,”

“I felt extremely frustrated. That is only natural and people started saying ‘He is going to retire’ but I couldn’t retire from international football.

“It is an absolute privilege and an honour to be involved. That will always remain the case.”

Crouch admits his move to the Potters has hindered his chances of making it into the Three Lions squad highlighting the fact that Capello has yet to visit the Britannia Stadium this season – something he feel’s is unfair.

“Of course I am frustrated. I see people coming in and going out. I have always been around the squad since 2005.” He said.

“It is only since I moved to Stoke that I wasn’t in the squad. I know the (Stoke) fans are annoyed at the fact he (Capello) has never been to the ground.

Crouch added: “It is frustrating in that I feel I have done extremely well for England and I feel I have not really been given a chance by the manager.

“I will always work hard and do the best I can do and hopefully it will be enough.”