Crystal Palace are currently linked with a January move for Liverpool star Rickie Lambert, and new boss Alan Pardew has now confirmed that the Eagles are definitely interesting in signing the struggling striker.

According to the media reports last week, Rickie Lambert is a transfer target for Crystal Palace. Their gaffer Alan Pardew has inquired about the availability of Lambert from Liverpool.

When asked this week about his alleged interest in Lambert, Pardew confirmed that he is monitoring’ Lambert.

“I did have a conversation with Brendan [Rodgers], but I don’t think Rickie is going anywhere. He wants to stay try and win his position, and I have no doubt he can do that.” said Pardew. 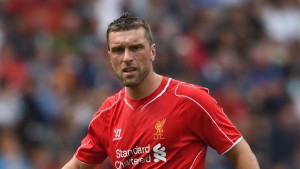 But there are some news coming from different reports that the Reds are not interested in selling. Brendan Rodgers has no intention of selling Lambert. The signing was always viewed as a Plan B and Rodgers wants to ensure they have that between now and the end of the campaign.

Lambert’s wish to stay and fight for his place is admirable, but that ship has arguably already sailed. With Balotelli and Borini misfiring, Sturridge out injured, Lambert had a golden opportunity to make himself the go-to striker at Anfield, but he singularly failed to do that.

The Englishman Sturridge will soon return, as Sterling has superseded him as the club’s main striker (for now), and the Reds are sure to sign a new top-class goalscorer sooner rather than later. As such, Lambert may not get another sustained opportunity to prove he’s the man for the job.