This one news has been sparkling for a while and now it seems done and dusted as the player himself has been quoted as saying that he’s moving clubs.

Danilo Pantic, the 18 year old Partisan Belgrade star, has said that he will move to Chelsea’s feeder club Vitesse Arnhem on loan before what he hopes will be a long and successful career at Stamford Bridge. 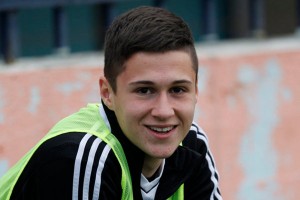 According to the reports,Danilo Pantic confirms he’s completed Chelsea transfer move as they quote the youngster as saying:

“As an 18-year-old it’s hard to get a chance at Chelsea straight away,” said Pantic “I already know a lot about Vitesse. It’s a big club where many young players play and games will be played offensively. If I play well at Vitesse, then I will go back to Chelsea.” he added.

The report wrap up that Chelsea will pay about £1.25m for the services of the player. Pantic has only played 18 times in the league for Partizan Belgrade since his debut in 2013.

But such has been the impression made that Chelsea obviously feel they have little to lose and everything to gain by his signing.

If Pantic makes the grade then Chelsea will have signed a top star for peanuts. But, if he does struggle to cope with the almost impossibly high standards required to get into, and remain in the Chelsea XI, the club will surely cover their costs with the resale.