Another injury for Arsenal, defender Mathieu Debuchy dislocated a shoulder during the 3-0 Premier League win against Stoke.

The Frenchman, landed heavily after colliding with Stoke’s Marko Arnautovic and was replaced by Hector Bellerin in the 13th minute at Emirates Stadium.

The Gunners gaffer, Arsene Wenger confirmed that the former Newcastle defender dislocated his shoulder. “It’s dislocated so it will take a while. He will have to see a specialist” said Wenger.

Speaking to media after the game, the Frenchman manager said that he would not be fit by next week.

Meanwhile, an ongoing ankle injury to left-back Kieran Gibbs may influence his activity in the January transfer window. 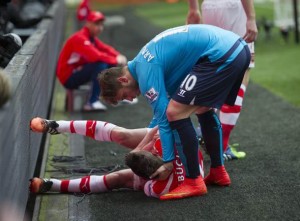 The 29 years-old Debuchy, who joined from Newcastle last July, has missed three months of the season with an ankle injury. During that absence Calum Chambers and Bellerin deputised at right-back.

In this season, Arsenal have been cursed with massive injury setbacks to key players in comparison to other teams in the Premier League.