The Ivronic star Didier Drogba has paid tribute to the inspirational way Chelsea team mates Frank Lampard and John Terry helped turn his career around after suffering some difficult times in his early days at Stamford Bridge.

The powerful striker, signed in a big-money deal from Olympique de Marseille 11 years ago, was frequently criticised by reporters for the theatrical way he would go to ground but he said Lampard and Terry made him clean up his act.

“I’m very proud because I managed to push things and also that I learned from my mistakes,” Drogba told media in an interview.

“Being around players like Frank and John and to see the way Frank was dealing with the press, always clean, a gentleman, I think it helps. You have to take it as an example and for me he was a big example.” he added. 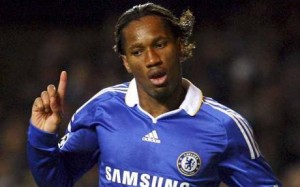 He scored 157 goals in 342 appearances in his first spell at Chelsea, scooping up silverware along the way.

Drogba left in a blaze of glory by scoring the equaliser in normal time and then the penalty shootout winner when the Londoners landed their maiden Champions League title in 2012 against Bayern Munich at the German club’s Allianz Arena.

After short spells in China and Turkey, Drogba made an emotional return when he signed a one-year contract with Chelsea at the start of the season.

As now, the former England midfielder will be back at Stamford Bridge on Saturday when Chelsea, who have a five-point lead over the Premier League champions, take on City in a title showdown.