According to Chelsea players, he is an inspiration. His manager loves him, the fans adore him. But a problem is looming for Diego Costa.

The Spaniard is a wind-up merchant without compare in the Premier League now Luis Suarez has left these shores. He is in the faces of his opponents every minute of every game, he runs and runs for the team and never ever gives up, and he scores goals – 17 of them so far.

Other than that the £32million st 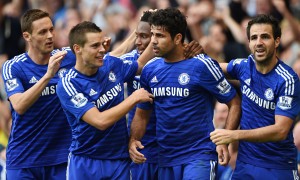 riker has been booked eight times – and twice for Spain – and served one ban in his six months in English football. And now he has been charged with violent conduct, which means that he faces missing a key game against Manchester City on Saturday, as well as Chelsea’s following two matches.

But among his team-mates, Costa is an inspiration. “Diego motivates us all. When you play with this guy, you have to give everything.” said Eden Hazard.

The Belgian International said that while training he is different. But in games he is very good. He never stops. He had a very good mentality against Liverpool.

Chelsea gaffer has already said he will not try to curb Costa’s aggression. In fact the Chelsea manager loves it. When he arrived in the summer after his switch from Atletico Madrid, Already Costa said once that the main things the manager said to me when I came was that he doesn’t want me to change.