The Brazilian attacker Douglas Costa wants to make a ‘dream’ move to Chelsea this month after the Blues tabled a €21m bid to Shakhtar Donetsk.

According to the reports, Costa has been at Shakhtar since joining from Gremio in 2010 and has played a key role in helping them win the Ukrainian Premier Leaguefor the past five consecutive seasons.

Costa’s impressive form has seen him linked with a move to the Premier League in the past and that speculation intensified once again this week with reports on Thursday claiming that Chelsea have tabled a €21m (£16m) bid for his services. 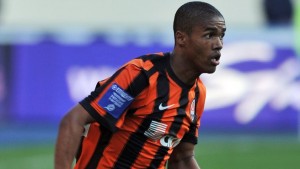 The 24 years-old has now spoken out over Chelsea’s interest and has confirmed it would be a dream for him to join the Premier League leaders, and says he’ll do his best to negotiate his way out of Shakhtar this month

“It would be a dream to play for Chelsea, It’s a unique chance. I will try to negotiate.” said Costa.

He is an attacking midfielder who can play anywhere across the front three positions behind the striker but he’s predominantly been used in the middle or from the right-wing at Shakhtar during his five year at the club.

Costa only earned 2 caps for the Brazilian national team so far during his career but thankfully for Chelsea, he has dual-Portuguese nationality so won’t require a work permit to live and work in Britain.