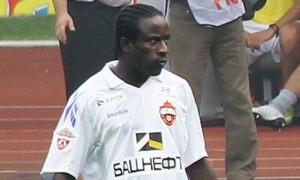 CSKA Moscow striker Seydou Doumbia has indicated he would welcome a move to England after being linked with Tottenham Hotspur Sky Sports understands.

The 23-year-old is reportedly a priority target for Spurs boss Harry Redknapp as he continues to search for attacking options ready for the transfer window opening in January.

Doumbia, who has been prolific in the Russian Premier League, spoke of his eagerness to move to White Hart Lane revealing it’s his dream to play in the Premier League and be managed Redknapp.

“I am very interested in playing in the English league. Harry Redknapp

is a coach African players love, so who knows?” He said.

“It is only paper talk at the moment. I want to make a name for myself in the Russian league and in the Champions League as well, the rest will come once I am playing very well.

“My dream is to play in the Premier League, everyone knows that.”

Spurs could face competition from rivals Manchester City for Doumbia’s signature with Roberto Mancini reported to have taken a shine to the forward.

However the Ivorian is said to be attracted to the proposition of moving to London and that could count in the Redknapp’s favour should both sides decide to make a move for him.