Being dropped gave Simon Mignolet a chance to reflect and improve

The Reds goalkeeper Simon Mignolet says manager Brendan Rodgers’ decision to leave him out of the starting line-up during a brief period in December has helped him respond positively and improve his confidence.

The Belgium international moved to Anfield in summer 2013, replacing Pepe Reina, after an impressive spell at Sunderland. Even though he was unmovable for Rodgers during his debut campaign, his position become increasingly uncertain this season after a series of mistakes. 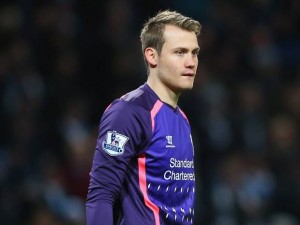 Liverpool gaffer Brendon Rodgers surprisingly dropped him and put understudy Brad Jones between the sticks for the game against Manchester United in December, which the Reds lost 3-0.

He was also named as a substitute for the following games against Bournemouth, Arsenal and Burnley.

“You don’t want to be out of the team, you always want to play every single game. But it gave me a chance to reflect on a few things, look back at my games and see where I could improve,” said Simon Mignolet to Liverpool’s official website.

Jones picked up an injury during the Boxing Day game against the Clarets, the 26-year-old ‘keeper enjoyed a chance to regain the number one role. He has responded with two clean sheets in the last Premier League games at Sunderland and Aston Villa.