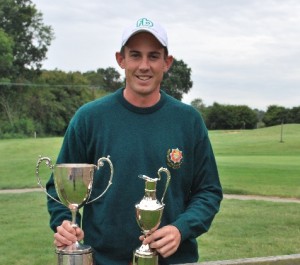 Duncan Scott of West Sussex Fire Brigade is the FSSAA 2011 National singles Champion after completing 36 holes in a stylish 149 at the challenging Bransford Golf club in Worcestershire.

The first 18 saw Scott take control with an incredible 16 pars and two birdies to place him on 2 under with Martin Cleverley close behind after a remarkable hole in one that placed him one shot in front of Scott on 69. The afternoon round saw a change of weather with many expecting scores to be bettered however pressure took it’s toll with even Scott scoring a 9 to put most challengers back into contention.

Cleverley, who’s hole in one had put him in the running made hard work of the second 18 and carded a nett 85 which ended all hopes of claiming the trophy.

The afternoon’s back nine saw Scott again take command with the 33 year old finishing his second round of the day on 79. This left Lee Williams with all the work to do but an improved second round of 76, two shots better than the mornings golf could not see him finish higher than Scott, eventually losing by five shots.

A very happy Duncan Scott said after the tournament win:

“I’m well chuffed, I’ve worked hard on my golf recently and it was a testing course, I hope to be back for next year’s competition”.