Lionel Messi could turn out to be a wild gamble Chelsea don’t need to take. Why? Because the third man on that most valuable players list in 2014 was their very own Hazard.

Signed as a 21-year-old for an eye-watering 32 million pounds from Lille in June 2012, Hazard has silenced critics who questioned the size of his transfer fee.

Hazard made a phenomenal 62 appearances in all competitions for the Blues in his first season, scoring 13 goals.

The Belgium international rapidly build on this platform in the last season. With Jose Mourinho back in the dugout and Chelsea’s recognised strikers Torres, Samuel Eto’o and Demba Ba toiling for form, Hazard soon found himself the focal point of the Blues’ creative play and completed the campaign as top scorer with 17 goals. 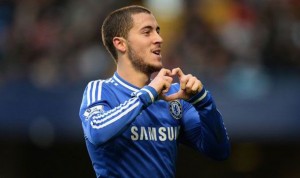 Chelsea handed the prestigious No. 10 shirt last summer that was vacated by Juan Mata, Hazard continues to dazzle as Mourinho revs up the Blues to win silverware.

So far this season, he has 11 goals to his name in all competitions, just three behind out-and-out striker Diego Costa.

Now, the key factor to be consider is that Hazard has his best football years in front of him. At Chelsea, he has the perfect platform to play to the best of his scintillating ability, and as his appearance stats show, he has attained untouchable status for Mourinho