According to reports in Italy, Chelsea star Mohamed Salah wants a move to AS Roma in this transfer window.

The player’s agent has been in talks with both Chelsea and Roma in the past few days to come to an agreement for the forward to join the Serie A side on loan until the end of the season.

The Egyptian international has found his chances limited this season and wants to find a club that can give him more playing time. 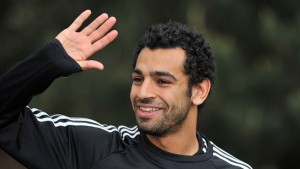 According to the reports this morning that Salah is now convinced about the Roma project after he had doubts at the start of the discussions. The Chelsea star wasn’t totally sold on the idea of only going to Italy on loan for a six month period but, after further talks, Salah is now up for the move.

As the past reports this week, Salah was thinking about the impact a move to Roma would have on his family and his wife has had a big say in the decision. All that needs to happen now is for Chelsea and Roma to come to an agreement on the loan deal.

The Premier League side are holding out for €1.5m whilst Roma have only offered €500k so they will need to hold more talks to come to a solution before the transfer deadline on February 2.