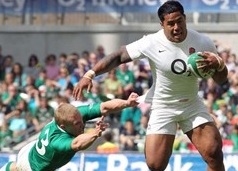 England centre Manu Tuilagi has been fined by the Officials of the Rugby World Cup for wearing a gumshield that had a sponsor on it during the recent win against Georgia.

The fine is reported to be around £4800 and the Rugby Football Union (RFU) claim that it was a genuine error wearing the gumshield as it is one he has been using since he played for England at U18 level.

“I didn’t know I had worn the wrong gumshield and I got fined for it. We (He and his brother Alesana) always wore the same mouthguard, mine is the England one from the under-18s, but it’s not allowed in the World Cup,” added Tuilagi, who has been in impressive form in New Zealand.”

“I coloured it in with marker pen for the Romania game. I wore it against Argentina but they didn’t know.”

There was some good news for the England rugby team however with fly half Jonny Wilkinson taking part in some light training early on Tuesday.