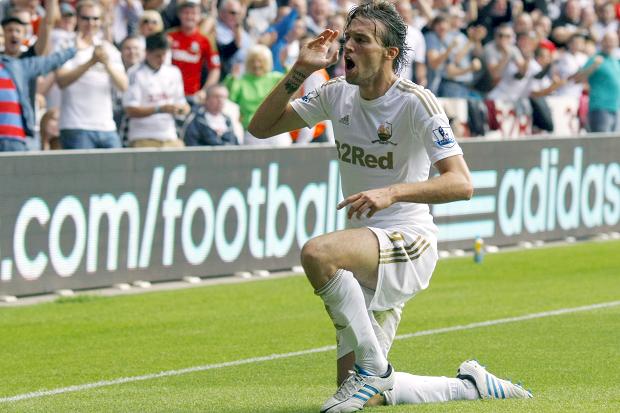 Swansea are 21/20 favourites to win their final Europa League Group A fixture against St. Gallen as the Welsh side need just a point in Switzerland to make it through to the last 32.

It’s already been quite a journey for Swansea in the Europa League this season but the reigning League Cup winners can go that bit further if they manage to get a draw at St. Gallen.

Swansea are currently second in Group A and have a three point gap over Kuban Krasnodar who could overthrow the Welsh side should things go awry in Switzerland.

Ahead of the crunch tie, Michael Laudrup will be given a welcomed boost upfront as Spanish striker Michu has recovered from a hamstring injury and is likely to be the focal point in their attack.

However, The Jacks have been rocked by the news that goalkeeper Michel Vorm is going to miss the trip with a knee injury meaning that substitute goalkeeper Gerhard Tremmel will deputise in the Dutchman’s absence.

St. Gallen’s Europa League is over as the Swiss side are already eliminated from the competition although a win could see them jump into third if Kuban were to lose against Valencia.

However, the home side are plagued with injuries with several first team members out of the tie including the preferred attacking duo of Daniel Sikorski and Dzengis Cavusevic who are both out with cruciate ligament problems.

On top of that, defender Mario Mutsch is out of the clash at the AFG Arena as he is serving a one-game suspension for collecting too many yellow cards.

The only team that could spoil Swansea’s party is Russian side Kuban Krasnodar who have the unenviable task of travelling to Spain where they must beat group winners Valencia by at least 2 goals to stand any chance of making it through.

Kuban will be without any major injury concerns going into their visit to Spain and will no doubt look to their
midfield duo of Charles Kabore and Ivelin Popov to use their international experience to help create plenty of opportunities and test the Valencia defence as often as possible.

With top spot already secured in the group, Valencia will look to finish the group stages on a high and the Spanish side will only be without goalkeeper Vincent Guaita going into the fixture.

Swansea have already come a long way in their debut season in the Europa League and the Welsh side will no doubt look to continue their journey by getting the result they want in Switzerland on Thursday evening.