Everton ready to tie playmaker down to new contract 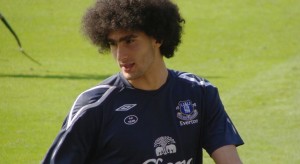 After a disappointing midweek ejection from the Carling Cup, Everton fans will be pleased to hear the news that Marouane Fellaini could be signing a new contract with the club in the coming weeks.

According to sources, the midfielder is currently in negotiations with the Merseysiders and will be expected to sign an extension by Christmas.

The Belgian international is now in his fourth season with the Goodison Park side and has made an impressive impact since his 2008 arrival.

At 23, Fellaini still has a lot to prove in the English top flight and David Moyes will be perhaps one of the happiest to hear his star is close to agreeing anew deal. Making his debut in 2007, the playmaker has made 30 appearances for the Belgian national side and is now one of the more experienced minds at Goodison.

Fellaini has now made 100 appearances in the Everton shirt and despite suffering an ankle injury, looks determined to fire the club to new Premier League heights.