Liverpool will look to continue the momentum gained over the last few weeks, when Brendon Rodgers’ men will travel to the Stadium of Light to play Sunderland on Saturday.

The Reds have picked up eight points from their last four games. Now, all eyes will remain on the former England captain, Steven Gerrard, who recently announced he would be leaving the club at the end of the season to join MLS side LA Galaxy.

The skipper has scored Liverpool’s last four goals, slotting two penalties in their 2-2 draw with Leicester before scoring twice against AFC Wimbledon to help his side progress to the fourth round of the FA Cup.

Liverpool goalkeeper, Simon Mignolet looks set to start again as he seeks to regain the form that forced Liverpool to splash out £9 million for him in June 2013. 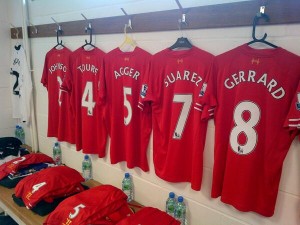 With injuries to Johnson and Flanagan, and Toure travelling to Africa on international duty, Rodgers has a depleted back line. Emre Can will continue his partnership alongside Martin Skrtel and Mamadou Sakho, while Spaniards Alberto Moreno and Javi Manquillo could fill the wing-back roles.

Adam Lallana is sidelined due to a calf injury he picked up in the 2-2 draw to Leicester, while Kolo Toure has gone on international duty with the Ivory Coast.

Striker Daniel Sturridge is back in the country but still a fortnight away from a long-awaited return from a thigh problem. While, Mario Balotelli regaining his fitness, but gaffer Rodgers looks set to continue using Raheem Sterling as the central striker.