Tottenham Hotspur produced one of the shocks of the season when they beat London rivals Chelsea 5-3 at White Hart Lane on New Year’s Day after Jose Mourinho’s side had dropped points previously in a 1-1 draw with high-flyers Southampton.

However, Chelsea returned to winning ways by knocking second-tier Watford out of the FA Cup and winning 2-0 at home to Newcastle in the league.

“There is never complacency at Chelsea, we just want to win every game,” said the Spaniard international Fabregas ahead of the Blues’ trip to south Wales. 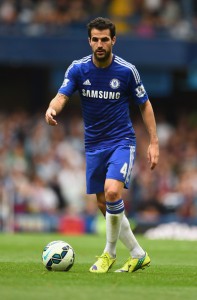 “Of course that’s not possible through the season, there are many, many games. Losing to Tottenham like we did was a shock, but when you watch the game again you see that every chance they had, they scored,” the playmaker added.

Fabregas admits that  against Tottenham things  didn’t go our way, but credit to Tottenham, they played a good game. But that’s it, and they are just looking to move forward now.

Chelsea goalkeeper Thibault Courtois could be forced to miss a third straight game after suffering a thumb injury against Spurs.

Courtois is back in training and could play for Chelsea with some sort of brace, but the injury is still not fully healed.

Mourinho, however, has no reason to take any risks over the 22-year-old’s fitness, with veteran reserve keeper Petr Cech keeping two clean sheets against Watford and Newcastle in the Belgian’s absence.