The Reds were 3-1 victors in the reverse fixture on December 2 and know a victory on Merseyside will enhance their top four credentials.

Liverpool gaffer, Brendan Rodgers is expected to shuffle his pack again, following Monday’s victory against Swansea, but is likely to keep faith with the 3-4-2-1 system that has seen an upturn in form.

Captain Steven Gerrard returns to central midfield after being rested on Monday against Swansea. 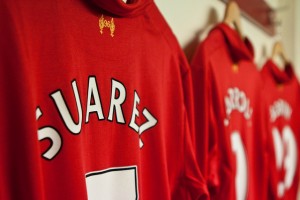 While, defender Martin Skrtel is suspended for the visit of Leicester with Kolo Toure likely to step in as a replacement.

Fellow centre-back Dejan Lovren only returned to training this week after missing the last three matches with a groin injury and is more likely to feature in the weekend’s FA Cup tie.

Despite his excellent form, Adam Lallana could be rested after starting five consecutive games, with a view to upcoming matches and the possibility of bringing him on as a sub if need be

Rodgers may also drop Raheem Sterling, who has scored three goals in his last four matches, and the young England star should remain as the focal point of a ‘striker-less’ attack in absence of Daniel Sturbridge.