Steven Gerrard’s incredible service to Liverpool allows him the right to speak to any club for his future.

That is the message from his manager Brendan Rodgers, who has insisted that he remains completely relaxed about his captain’s future at Anfield.

The Reds’ boss believes he has a close enough relationship with the veteran midfielder to be confident that Gerrard will stay with Liverpool till end of the season.

The Reds gaffer, Brendon Rodgers accepts the player’s loyalty to the club he has served for more than 20 years allows him the absolute respect to do what he wishes. 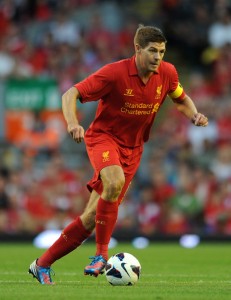 Asked if he was concerned that his captain hadn’t yet signed a new contract, which means he can speak to foreign teams, probably LA Galaxy, the Anfield manager said

“I think he has earned that respect if he does. I have got a great relationship and communication with Steven so we understand exactly the position”.

Rodgers believes Gerrard still has so much to offer to Liverpool, and even though the midfielder has been linked with the New York Red Bulls and his old Anfield boss Gerrard Houllier, the Liverpool manager is confident a new deal will be agreed.