Gerrard revealed LA Galaxy as a right club for his future

The former England Captain has revealed why he decided LA Galaxy were the right club for him to join after confirming he will leave Liverpool at the end of the current season.

Gerrard will bring his 17-year spell in the Reds first team to a close at the conclusion of 2014-15 and will move to the United States to sign for the Major League Soccer side.

On the day LA Galaxy were confirmed as Gerrard’s next club, the 34-year-old gave an interview to explain what enticed him to the American side.

“Their pursuit of me was very aggressive and the talks I have had with them have been very positive.” said Gerrard.

Liverpool captain said that there is a huge bonus involved in terms of where the LA Galaxy are located, so that will be nice for his family to come out of their comfort zone and try something different. 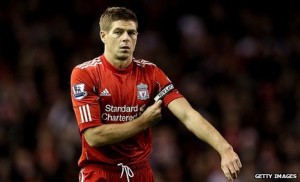 He admits speaking to Galaxy manager Bruce Arena, as well as members of the club’s hierarchy, convinced him they could match his ambition to lift silverware Stateside.

In joining LA Galaxy, Gerrard will be reunited with a former Anfield teammate in Robbie Keane. The pair played alongside each other during the striker’s stint with the Reds in 2008-09.