Liverpool host Chelsea in the first of a two-legged affair in the semi-final on the League Cup on Tuesday night in what promises to be a big night under the lights at Anfield. 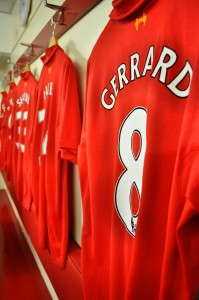 A two-legged Chelsea semifinal brings back with fonder memories for Liverpool supporters, as each of their two Champions League finals in 2005 and 2007 were reached on the strength of victories over Chelsea.

They last met in the League Cup in 2011, with goals from Maxi Rodriguez and Martin Kelly securing a 2-0 win in the quarterfinal at Stamford Bridge.

Previously they faced off in the 2005 final, with Chelsea running out 3-2 winners via goals in extra time from Didier Drogba and Mateja Kezman.

Liverpool captain Steven Gerrard is set to return to face Chelsea in the Capital One Cup semi-final first leg after resting his tight hamstring at the weekend.

Striker Mario Balotelli also missed the win at Aston Villa with a chest infection and remains a doubt for the squad.

Forward Fabio Borini, despite scoring at Villa Park, could be the one to make way to accommodate Gerrard at Anfield.