The Gunners are eyeing a late move for Mattia Destro

According to the repots, Mattia Destro is ‘likely’ to become Arsenal’s third signing of the January transfer window as Arsene Wenger lines-up a late move for the €20m-rated Italian forward.

He has emerged as one of the most sought-after strikers in the Serie A after scoring 23 goals in 52 appearances for Roma since making the move from Genoa in 2012. 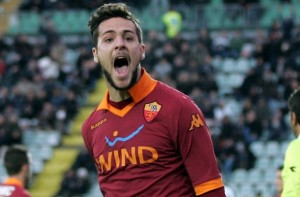 Destro enduring a more difficult time this season with the 23-year-old starting just 9 league games so far and although he’s still managed to find the back of the net on 5 occasions, it hasn’t stopped speculation linking him with a move away from the Stadio Olimpico.

As the reports in Italy earlier this month suggested that Arsenal were keen on offering Destro a fresh start in England and had held preliminary talks with the players agent in London about a potential move this month.

Also there have been rumours that we’ll look to secure a loan deal with a view to making it permanent in the summer but the newspaper claims that the Italian international will command a fee of €20m (£15m) should we buy him outright.

The Frenchman has sent Yaya Sanogo, Lukas Podolski and Joel Campbell out on loan this month so it wouldn’t be a huge surprise if the boss was to bring in another attacker before the window closes and Destro is emerging as the top target.