Arsenal are close to signing highly-rated Croatian international midfielder Marcelo Brozovic, as his club Dinamo Zagreb believe a deal is close, according to reports in media.

The colossal midfielder has been attracting plenty of interest from a host of clubs, with Dinamo Zagreb demanding £8 million for the midfielder’s signature as a number of clubs queue up.

The Gunners and AC Milan have both had £5 million offers rejected according to reports in Football Italia, while Inter, Everton and Fiorentina had also joined the race.

Meanwhile, Valencia had also joined the race for Brozovic prior to the new year and were considering making an offer for the highly sought-after Croatian, with the club demanding roughly £8 million. 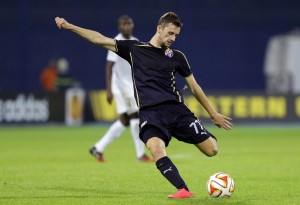 The acceleration in transfer talks for Brozovic may surprise Arsenal fans, especially after reports in the media claimed that Krystian Bielik was on the verge of joining.

Dinamo gaffer Zdravko Mamic recently quashed speculation his side would be offloading Brozovic, insisting that it would take a lot of money to take the talent away from the club in the January transfer window, but Zagreb have said they have received an offer of £6million on Monday and are happy with that as it is nearer their valuation.

Brozovic, who has played 56 games for Zagreb since joining the club back in 2012, has worked his way up in his home country at the likes of Hrvatski Dragovoljac and Lokomotiva, while representing his country six times. He completed 16/28 take ons in the Europa League this season.